Sandstone is a sedimentary rock found in sedimentary basins worldwide. If several conditions are met, sandstones build rock towns. Czech siliceous sandstone coming from shallow marine sediments of the Cretaceous period fulfills most of them. Therefore, there are uniquely many larger or smaller sandstone rock cities in a relatively small territory in the Czech Republic. The most well-known protected landscape areas with sandstone rock towns are Bohemian Switzerland (neighboring  Saxon Switzerland in Germany), Bohemian paradise, Broumov (neighboring Table mountains in Poland) and finally Kokořínsko where WOC 2021 is going to take place.

The sandstone areas of deep valleys and forests were considered mysterious and are a popular stage where many local legends and fairy tales take place. They were used as hideaways for robbers or wanted persons and therefore were not often visited by ordinary people in the past. First adventurers started to explore sandstone areas in the Romantic period. Popularity of these beautiful areas has only started to develop in the 20th century when many hiking routes were created as well as the first simple maps and climbing routes. That was also the time that the first orienteers visited these areas and immediately started to love them.

Undoubtedly, sandstone terrains belong to the most beautiful and most challenging terrains, at least in the Czech Republic. Generally, there are two types of terrains.

The first type could be called sandstone cities with individual rock pillars that in fact look like cities with wildly structured alleys. These terrains are really amazing and unique, however, the vast majority is located in the most protected landscape areas where visitors are not allowed to step out of the marked paths and no orienteering is allowed there.

The second terrain type is typically created by deep valleys trimmed by one or even more rows of cliffs with passages between them and several isolated rock pillars. Moreover, there are often small cliffs or boulders in the slopes. 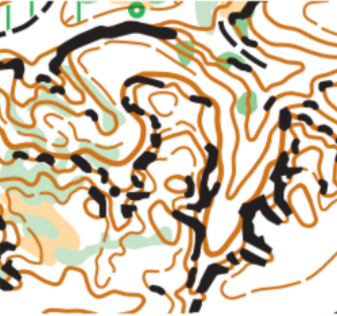 Valleys trimmed by rows of sandstone cliffs in Kokořínsko area

This type of terrain is not so difficult for control picking but rather challenging for making correct route choices. For the Kokořínsko area, this second type of sandstone terrain prevails, but there are also several small areas of sandstone cities. This creates perfectly challenging terrains for both long distance and relays.

Specifics for orienteering in sandstones


Sandstone terrains belong to the most challenging terrain types for cartographers for several reasons: poor GPS quality in deep valleys, harsh movement in its steep slopes but the main issue is generalization – to decide what appears in the map and what does not. To ensure the map readability in sandstone areas it is often necessary to skip some objects which are too small to be in the map. One exception are very narrow but passable passages between cliffs which should be always drawn even a little bit wider to be well visible because their existence could influence route choices substantially.

Tactics for orienteering in sandstones: no miraculous recipe 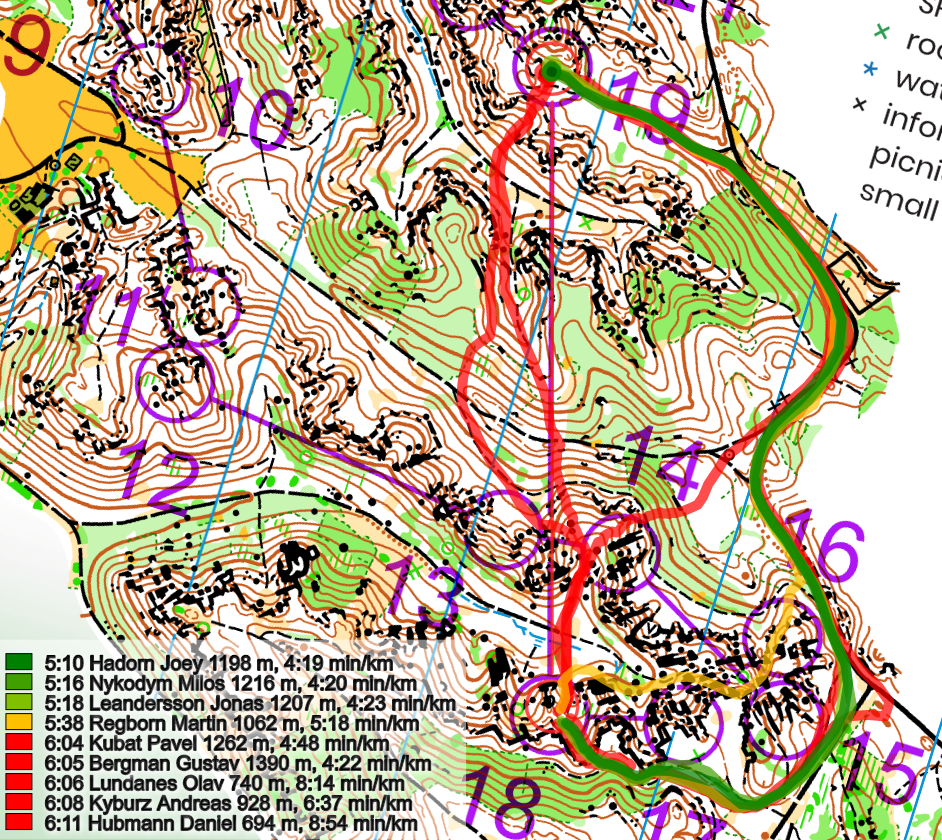 Analysis of the leg to the 19th control in the Wold Cup Middle 2018, Valdštejn, Czech Republic (World of O)

One of the most difficult things for runners with not so much experience with sandstone terrain are route choices, especially those related to elevation on the route. And sandstones are not the type of terrain that forgives wrong route choices easily.
From the analysis of  the World Cup Middle in the Czech Republic 2018 you can see that even for the top athletes the longer right route to the 19th control was not the choice. Even if it saves lots of elevation. Miloš Nykodým running together with Joey Hadorn achieved the best time here and made an important step to his victory.

On the other hand, looking back to the Long Distance Czech Champs 2006 in Kokořínsko area, Michal Smola had the best splits on the crucial 2-3 leg and the 16-17 leg with almost straight route choice and the second best on the 18-19 leg with the straight tactics as well. However, the question remains what times he would have achieved with the other variants as he was in such a good physical shape in that race that he won with a gap of more than 3 minutes. In general, it is therefore difficult to define a universal rule to find the best route choice in sandstone terrains. It always varies leg by leg and is influenced by the runner somatotype as well.

However, there are some patterns that might make it easier to make the right decision.

The control description can be a rather surprising factor that can easily influence the whole route choice – it is crucial to consider it in case of narrow passages or re-entrants where the location of the flag in Upper part or in Lower part could mean many meters of elevation and where a good route choice can save many seconds.
Another thing to keep in mind while making the route choice is that on top of the cliffs there are often plateaus allowing athletes to run faster than under the cliffs where keeping the pace in the steep slopes is usually tougher. On the other hand, in most cases the controls themselves are much better seen from below than from above.
There is one technical mistake typical for the area of Kokořínsko. There are often meadows in the bottom of valleys lined by high and long rock cliffs. On top of these rocks, there is a forest. In the map then, the rock cliffs are drawn by a long black line which is substantially thicker than the map symbol of “distinct cultivation boundary”. However, in the race speed this could be easily misinterpreted. The athletes would then be very unpleasantly surprised that they cannot simply cross the (presumed) vegetation boundary between open land and forest because there are high rock cliffs and they would have to find the nearest passage which could be quite far.

These were some of the specifics of sandstones, soon we will see many interesting route choices and probably also mistakes at the WOC 2021. Sadly, this year we cannot give the opportunity to run the WOC terrains to everyone. However, we will welcome you in 2022 with tons of sandstones still waiting for you. In these breathtaking terrains, just remember: enjoy your race.