World Orienteering Championships 2021 will bring about a lot of variety. Variety in terrains, courses but also the venues where the medal fights will take place. None of the venues is alike. The sprint courses will take us to places of very rich and touching history. Sprint relays will be held in one of the most popular summer resorts. The venue for middle distance, on the other hand, is famous for winter sports. And the relay and long arena is the gate to one of the most romantic and unique protected areas in the country. Join the ride to these venues in today‘s Road to WOC.

Sprint: Terezín
The first stage of the WOC 2021 will take place in Terezín (Theresienstadt). It is a small historic fortress town north of Prague (60km) with a population of 3 000. It is the only WOC venue situated in the Region of Ústí nad Labem.

Terezín is widely known for its history, especially its sad part. Being a ghetto and a nazi prison is probably the most common association with the small historic town. The story however goes much further.

Back in the 18th century Terezín was established by the Austrian-Hungarian emperor Joseph II. It was designed as a bastion fortress protected by a sophisticated wall system. It was built to protect the empire from the northern side. Terezín, based on the river Ohře, became a gate to the empire. A beautiful pulsing town with a grid of streets and spacious boulevards was established inside the walls. Those days, it was a famous meeting points for monarchs from the whole Europe who came to admire the perfection of the fortress. The fortress is listed on the UNESCO heritage indicative list. The Nazi occupation and a gestapo prison built in the Small Fortress and the Jewish ghetto in the town brought about four years of immeasurable suffering which made Terezín famous all over the world. Visitors can learn more about the town history during the World War II in the Terezín Memorial. Even if you could not come to visit it in person, don‘t miss a virtual tour on their website!

Sprint relay: Doksy
On Sunday, all eyes will be on the event center. Doksy is a small town in the Liberec Region. The Doksy municipality is made of several smaller parts, two of the best well known are: Doksy and Staré Splavy. The population is about 5 000.

There is so much to say about Doksy! The town was established in the 13th century and not much later there was built a large pond very close to the town. In 1960s the scenic pond was named Mácha‘s Lake – after a well-known Czech romantic poet who immortalized the surroundings in one of the most famous Czech poems “Máj“. Mácha‘s Lake and its surroundings ranks among the most popular summer resorts for Czechs. Usually, it is pulsing with (night) life. However, there is more than beach and disco! Coming to Doksy, you cannot miss one of the most iconic sceneries – the ruins of the Bezděz castle placed on top of a monumental hill recognizable from far away. There is another bunch of people who love to come to the surroundings of Doksy – orienteers! So many great and varied terrains around, amazingly beautiful forests and good accommodation capacities make it a great destination for camps. However, no matter how popular the surroundings, the town itself has not been used for a competiton!

Middle: Smržovka
On the way from Jablonec nad Nisou to Tanvald, you come to Smržovka. A town of 4 000 located in the Jizerské hory. Similarly to other mountain settlements, it was famous for glass industry and weaving. Smržovka faced several waves of depopulation – due to economic reasons in the end of 19th century and after the World War II with its cruelties, the German population (vast majority of the town) was expulsed.
On their place new population was installed by authorities. This was a typical pattern for the towns and villages in so called „Sudetenland“. No matter how bitter it still is to talk about all the mutual injustice and problems it brought, this history is important to understand the region development. The communities of many towns and villages were often paralysed and started to develop as late as in 1990s and thanks to the local authorities managed to significantly improve the quality of life in the region. In our previous Road to WOC we advised to come to Smržovka by train. And it was for a reason! A stunning railway viaduct is one of the most recognizable places of the town. Above the town you can also visit a well-known watch tower Černá Studnice – it is a great destination for hiking, cycling, cross- country or downhill skiing for the locals. One feature makes Smržovka really unique – a toboggan run.

One out of two in the country. And the town apparently loves the sport. Several members of the sledding national team were born here and recently, a new natural 4 km long sledding track was created on the slopes of Černá Studnice. 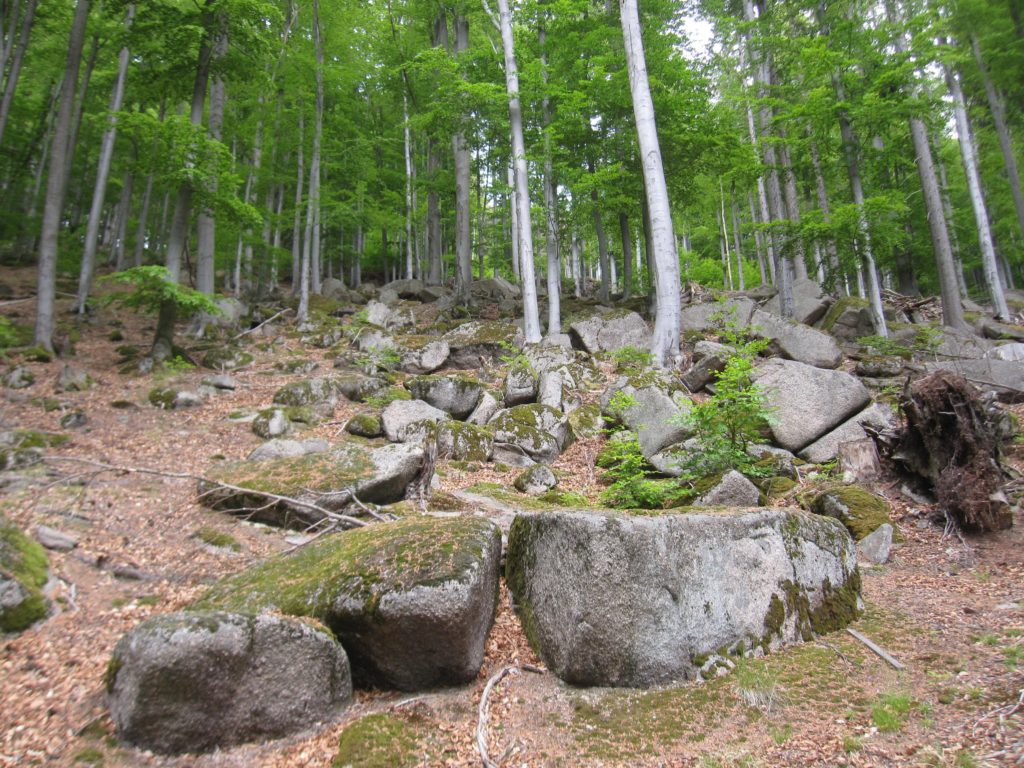 Relay and Long: Heřmánky (Dubá)
Dubá with the population of about 1 700 is the smallest WOC venue. Dubá governs 20 settlements, such as Heřmánky, Dřevčice or Lhota, all having a distinctive folk architecture. The settlements’ history dates back to the 11th century and there are a number of historical features in the town area. The highlight is a former hop-drying house. Its external appearance was renovated last year and it became the Cultural Monument of the year for the Liberec Region. The town of Dubá was also awarded Historical Town of the Liberec Region 2020.
The town is an entry gate to the Natural Protected Area Kokořínsko that used to be called also Polomené hory or Daubauer Schweiz for its amazing sandstone rock creations. The most popular part is around the Kokořín castle and the Kokořín Lids. Sandstone formations that really look like lids emerged thanks to the sandstone layers of different hardiness. Contrary to the best known part that is usually very crowded, the area around Dubá offers much more romance as well as wilderness. There is a reason why it was the first area in the country where wolves re-settled after centuries (but no worries, there are not many of them).